Check out the contributions to Dirty Debüt S2-#9 after life!

Looking for places to rest in and lean on: »I needed your lap for a little. Could you give me a hand? You could also sit on my lap or lay your head on it and rest. I can sing lull- abies at your ear and later whine on your face. It might fall on your lap and that’s ok, we can chill.«


Marga (Lisbon,1994) uses media to carve safe-spaces for the exploration of intimacy and sexuality through dance and performance. Heavily influenced by dance-genres and sound textures from the african diaspora disseminated through Lisbon’s social tissue, she attempts an active claim of womanhood, crossing the exercise of sensuality in public and private space. Graduated from HZT’s BA in dance and choreography in Berlin (2017-2021), she is seeking to combine social dancing settings with her artistic work, together with her dance collective AMIGAS, they look to start a dance-space to host formats for interdisciplinary art in Berlin.


Myriam Lucas is a dancer, teaching artist and choreographer from San Diego, California. She began her dancing as a freestyle Hip-Hop dancer and has since moved into other urban dance forms and various contemporary movement techniques. In 2012, she received a Bravo Choreographers Prize, ‘Audience Favorite’, for her piece Two Fridas in 2014. She created Callous in 2014, her first full-length show inspired by the Frida Kahlo’s paintings. In 2018 she completed her 3-year length BA in Dance, Context and Choreography at HTZ Berlin. She is interested in telling women’s stories through an urbanistic movement lens and approach. Most importantly, she aspires to spread the knowledge about the inner workings of urban dance methodologies in artistic and practical ways.


Jules Petru Fricker (CH/RO) is an interdisciplinary artist working with choreography, dance and films. Their former stage alter ego Shiaz Legz* was born out of the experimental Berlin drag scene in 2014 as a form of liberation and a need for expansion. Fricker’s self-proclaimed alien cyborg practice is rooted in queerfeminist Sci-Fi and finds ways of summoning otherworldly, utopian islands of (be)longing.

As ghosts of the future and ghosts of the past, Akemi, Johanna, Evelyn, and their departed grandmothers Takako, Elisabeth, and Virginia commune in an intimate, trans-temporal encounter.


As a performer and choreographer, Johanna Ackva's interest lies in the material, sensory, affective, and political dimensions of the relationship between self and world. Exploring, (re)negotiating and sharing the specific, private or even seemingly banal of concrete experience, making it visible as included in larger contexts, is a central concern for her. Since 2014, her collaborative works have touched on themes such as work and its value (The Agreement), experiences of natural deserts and loneliness (Salt Lake), constructions of femininity (Women and Watery Men, EARTHBOUND SQUATTERS), friendship (haunting heroines, bluefold), or the theme of death and finitude (Out of Our Hands, Untitled Solo, CLOUDS ON CLEAR SKY). In 2017, Johanna co-founded the Berlin dance collective Suddenly and since 2019, she has been part of the Denk- und Produktionsort Libken (Uckermark).


Nagao Akemi is a choreographer and dancer. Her artistic interest lies in the conflict between social issues and the body, between words, images, sensations, and emotions. Her latest pieces, B OR D ER S?, JUICY ♡ METAMORPHOSIS and DIAMOND - The Crossing Point of Money and Spirituality negotiate taboo subjects such as discrimination, sexuality, and the connection between money and spirituality. September 2021, she graduated with her master’s in choreography (maC) at HZT Berlin and for her study, she has received scholarships from Deutschlandstipendium and Studienstiftung des deustchen Volkes.


Evelyn Saylor is a composer of electronic music, a performer, a singer and a keyboardist. Saylor finds arresting sounds in unexpected places and explores their materiality and sonic properties in her compositions through close recording and electronic manipulation. Found and created instruments, synthesis, processing, field recordings, and the human voice play a large role in her music. She has composed work for the concert, theater, modern dance, and for film, and has received performances in the Tischlerei of the Deutsche Oper, the Akademie der Künste, HAU2, Uferstudios, Dock 11, and other spaces in Berlin, as well as in New York, California, and throughout Europe.

with echoes filling up the orbit, but damaged

with echoes filling up the orbit, but damaged

An* & Moa‘s interest is focused on approach- es to communication, thereverberation of social interactions, the remnants and mate- riality of relational exchanges as worldbuild- ing. They‘re interested in the embodiment of the micro-relationships that surge when physical or emotional proximity is shared be- tween humans, non-human bodies and ele- ments, including networks and data. What becomes of the constant information-traffic we send back and forth? Of the selves we create on-, and the dreams we share off-, line? What shape do our layered relationships and interactions take? How do we map them and let them inhabit physical space?

The following is a string of themes, that came about as reflections written alongside the four performances by Nagao Akemi in collaboration with Johanna Ackva and Evelyn Saylor, Moa Johansson and An*dre Neely, ALFEiRAO, and Julian Petru Fricker. These works were shown on December 18, 2021, in Berlin and were developed under the notion of the afterlife...

The following is a string of themes, that came about as reflections written alongside the four performances by Nagao Akemi in collaboration with Johanna Ackva and Evelyn Saylor, Moa Johansson and An*dre Neely, the duo Marga Alfeirão with Myriam Lucas, and Julian Petru Fricker. These works were shown on December 18, 2021, in Berlin and were developed under the notion of the afterlife.

The performances at Dirty Debüt sparked an intimate preoccupation with death. Death, as a strand of life.

Death itself is arbitrary. Yet, it is a guaranteed terrific blow. We live up to then transpire from death. Whether the death is fierce, bureaucratic, or emotional, the event is unfailingly burdened by a resonating effect.

When death is incidental, as it ought to be, it will swell into this massive upshot for those of us living – as it ought to. A merited swelling, the qualities of death’s afterlife.

The hereafter has the greatest impact on our kindred. As they endure fantastic images of us hereafter, we are subjected to an after. Suppose the phrase, Life after death gives off some impression of tendrils, potent but made from no particular sustenance. The phrase then might accommodate this image of swirling movements muffled, murky, arranged into a private sphere of semiosis and symbols. Therein, over such small instances, spawns an activated force working through its coincidental and streamlined flows. Gestures and reverie are minuscule, in comparison, but effective.

“The only discernible stabilities in Relation have to do with the interdependence of the cycles operative there, how their corresponding patterns of movement are in tune. [...] Thought makes music.”

Glissant’s work came to mind during the opening piece by Marga Alfeirão with Myriam Lucas titled, lounge. lounge is a staging of detailed and tiny movements happening primarily at the midsection of each performer’s body, concentrated gyrations oft-sexualized by euro-canons. In witnessing the swaying pulsating pressure arising from their initial leisurely states of being, I wanted to chant out loud, “aye... aye!” To acknowledge the thrumming cadence before us. However, to match this simmering magnitude, that never arrived at its peak, my intended chant was set aside to a measured mummer.

Glissant wrote about relations as cyclical, repetitive, and curving towards or aside some chaos- climax. The relation indicates a sort of willingness to flow into another easily, similar to shock absorbers.

When intimate exchanges are undecipherable to an audience, as they were in Grandmothers by Nagao Akemi in collaboration with Johanna Ackva and Evelyn Saylor, they will be perceived in haste.

Overheard were remnants of conversations that happened elsewhere. Gratifyingly distant or producing a sense of awkward frustration if we, the audience, attempted to listen in on the conversations. So we collectively give in, to such a display of familial intimacies, one’s apparitions are leftover for us to disambiguate (or can be left behind). In harnessing the intimacies around exchange, lies the innate capacity for giving and receiving from another.

I suppose it helps to think of these exchanges as an impact, like a collision, resulting in a high- pitched ringing in your ear. According to some superstitious beliefs, the ringing will return when someone remembers you.

...and the work by Moa Johansson and An*dre Neely, with echoes filling up the orbit, but damaged.

“Scenes never rest, but are reconfigured within, dispersed across, and threaded through one another.”

Until the dolphin flies and parrots live at sea

What is so alluring about eternal rest after all? Putting the past to rest? Over and over again, the threshold to the afterlife is deliberately depicted as tantalizing.

And without recollection, how could one undergo such incurable longings and desires? Recollections are necessary to touch on or go within. Harrowing as it is soothing, recollection is at odds with suffering.

In the metamorphic presentation, The Liminoid by Julian Petru Fricker we see recollection as different manifestations that keep us tethered to archives of selfhood –– an embodiment and display of the bittersweet expression, “To kill your darlings.”


On death and quietus

My mom works with people that are in the last stages of their lives. Death surrounds her.

She spends a lot of energy on providing comfort and all the organizational tasks leading up to the moment of one’s passing, work understood as care-taking. In assisted living residences, medical staff is monitoring machines that beep around the clock. The beep signifies a beating heart. When that beep lengthens into a dial tone-like sound, the staff then understands that the lungs are no longer circulating air, the heart has stopped beating, and the life force has ended. It happens all the time in her work, and then the proper arrangements take place — the administrative afterward.

A few will be ferociously changed by this moment but most will not. 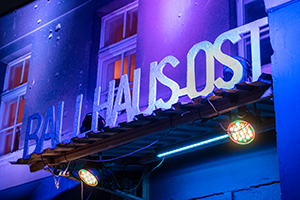 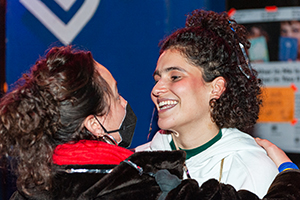 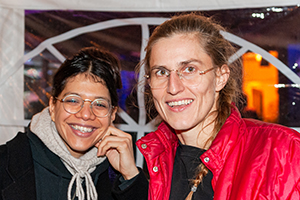 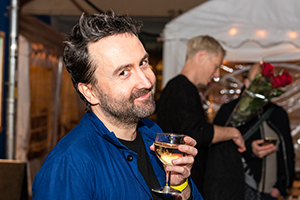 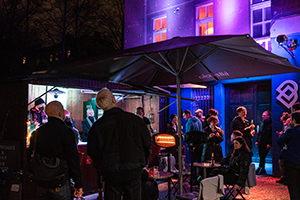 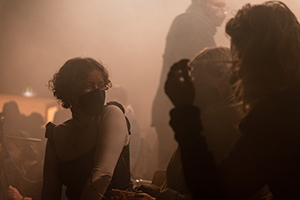 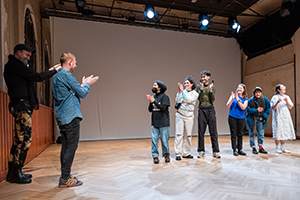 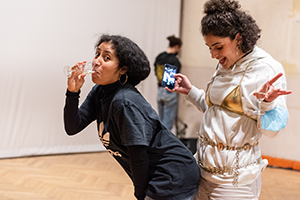 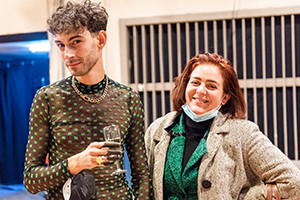 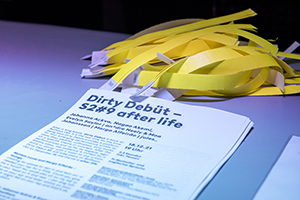 
A production by Björn Pätz & Sandra Umathum in cooperation with Ballhaus Ost.